Cutting edge treatment options for vascular lesions on the face

Vascular skin lesions such as telangiectasia in the face are generally common cosmetic blemishes. Women consider such vascular ectasia to be annoying, as it is difficult to conceal them with makeup. Among men, there is also increasing readiness to have these removed and to pay privately for the treatment.
For the treatment of fine, superficial vessels, which are common in the face, the QuadroStarPROYELLOW and the QuadroStarPROGREEN (577 & 532nm) are highly suitable. In fact, these special wavelengths are readily absorbed by the hemoglobin of the blood vessels. That means that the light is converted to heat, the blood vessel is damaged and disappears. The water surrounding of the vessel (tissue contains a high percentage of water) doesn’t absorb the green or yellow light at all, which results in the surrounding skin being spared. The vessels are ‘erased’ immediately without unattractive purpura (purplish discoloration). The risk of pigment changes and scarring is also very low.

Cutting edge treatment options for vascular lesions on the body

Leg veins remain one of the cosmetic problems where treatment is sought very frequently. For larger ectatic vessels, which are normally deeper in the skin, for example leg veins, the penetration depth of the green and yellow light is often not sufficient. Therefore, a longer wavelength of light in the near infrared range with sufficiently high power is necessary. The high-power diode lasers of the MeDioStar NeXT Family feature a special handpiece with a smaller spot, designed specially for the treatment of blood vessels.
Due to the higher penetration depth of laser light, lasers with wavelengths in the infrared range, such as the MeDioStar diode laser, are very well suited for the coagulation of leg veins and small vessels on the face. The blood readily absorbs the light while the water in the surrounding skin does not, ensuring effective damage to the blood vessel while protecting the surrounding skin at the same time.

How the treatment works

When treating vascular lesions, the light beam goes into the skin and is absorbed by the hemoglobin of the blood. This means that the blood is warmed significantly. This leads to an inflammation of the inner wall of the vessel and thus generates a bonding of the vessels. The result is the occlusion of the vessel, which takes some time depending on the size of the vessel (it takes more time for larger vessels, up to a few months for the deep bluish ones). Each laser beam has a certain color (wavelength). For small ectatic vessels, which are normally red and superficial, the yellow and green laser beams are particularly suitable, because they are readily absorbed by the blood. On the other hand, the water absorption is very low. Since normal skin consists mainly of water, the bloodless skin remains almost cold and so there is a very minimal risk of damaging the skin surrounding the vessel. For larger and deeper vessels (bluish), the infrared laser beam is more effective because this light penetrates deeper.

Pigmented lesions, and in particular age spots, are increasingly regarded by the persons affected as a cosmetic blemish. Age spots occur in 50% of women and 20% of men over the age of 50. As such signs of aging are increasingly being seen as annoying, the readiness to have these removed privately is also growing.
There are many different types of pigmented lesions, which differ from one another fundamentally in terms of their morphological and histological characteristics. For this reason, the evaluation of and possible therapy for pigmented lesions should always be reserved to doctors with specialist knowledge.
Benign pigmented lesions such as lentigo simplex, lentigo senilis (age and sun spots) and many other types of naevi may be treated with laser devices in various ways. Pico and Nano lasers emit short light pulses, which, thanks to their specific wavelength, are selectively absorbed by the skin pigment melanin. The laser treatment itself is uncomplicated and is conducted on an out-patient basis, with or without a local anesthetic.

Choosing the right wavelength: a decisive factor for the success of the treatment

The type of laser is a decisive factor when determining which color pigments may be treated particularly well and which colors do not respond as well to treatment.  Ruby lasers, which work in the near-infrared range, have proved themselves to be almost universally deployable in practice. As a result of the strong absorption of the ruby laser beam by the skin pigment melanin, these devices are particularly well-suited for the treatment of natural pigmented lesions. Patients generally tolerate the treatment without an anesthetic; a local anesthetic is only used in rare cases.
The wavelength of the Ruby or Nd:YAG laser light is specifically absorbed by the color pigments of the lesion. The energy is transferred and then fragments the colored particles from the connective tissue. The fragmented particles are then degraded epidermally and lymphatically. The irradiated area of skin appears whitish for between ten and twenty minutes immediately after treatment. A slight crust then forms, which will slough off after between one and two weeks.
Pigmented lesions may also be treated using ablative lasers. In this respect, it is necessary to differentiate between “cold ablation”, with the Dermablate Erbium:YAG laser for instance, and vaporization with the QuadroStarPRO green or yellow light.

The ablative lasers are the “gold standard” of lasers for dermatological treatments. They ablate the skin with a degree of precision that can be measured in microns. This makes it possible to safely and gently remove a wide variety of lesions from the skin at epidermis and dermis level. Due to their ease of absorption in water, both the Erbium:YAG (2,940 nm) and the CO2 (10,600 nm) wavelengths are highly suitable for this purpose.
The skin is disinfected before the treatment is carried out. Then, depending on the size and/or depth of the lesion to be dealt with, the dermatologist decides whether anesthesia is required and what type of anesthesia is appropriate (most of the treatments are very well tolerated without any anesthesia!).

Treatments using lasers are gentle on the skin and eliminate bothersome skin lesions very effectively and in a matter of minutes. The Erbium laser works very precisely and can selectively remove skin areas to a predefined depth with little pain. At the same time it stimulates skin renewal. The results are impressive: tangibly smoother, softer skin.
After treatment, it normally only takes a few days for the wound to heal. It is recommended not to expose the treated area to sunlight or sunbeds for at least 10/15 days prior to/following treatment. The use of sunscreen is recommended in summertime and in general when treating areas exposed to sunlight (e.g. the face).
Studies show that the Erbium laser is also very effective in treating scars, for example acne scars, and for skin rejuvenation. The success results from the highly precise removal of tissue during treatment, softening and smoothing of tissue during wound healing and collagen neogenesis during the first year post-op.

What kind of pigmented lesions can be treated?

The Pico and Nano lasers from Asclepion can effectively and safely remove a large variety of pigmented lesions:
• Lentigines
• Ephelides
• Naevus of Ota/Ito
• Tattoo

How does the removal of pigments with lasers work?

The laser beam penetrates through the upper layer of the skin and is absorbed by the color of the pigments. As the high-energy laser pulses of these devices are only last a few nanoseconds, they are absorbed by the pigment particles selectively without causing any coincident thermal damage to the surrounding tissue. The ink particles are fragmented by the laser irradiation and the broken-down ink are removed by the body’s own lymph system.

What is the course of treatment?

The distance holder of the laser handpiece is placed onto the skin. After the laser is activated via the foot switch, a light impulse is sent, which results in a gentle prickling sensation. The areas to be treated are then moved over with the handpiece of the laser. Immediately following the treatment, the treated area presents the so-called “popcorn effect”, appearing white and displaying blisters. Following the treatment, a redness of the skin, strong sensations of warmth or wheals may occur. After a few hours, the treated areas might darken and a small crust may form. This disappears within a few days. The next treatment, if necessary, can be carried out after six to eight weeks.

What needs to be considered following treatment?

Cool the treated skin for as long as it is comfortable for you. If crusts form, leave them alone. Protect treated areas from sunlight or intensive light (tanning salons) for at least six weeks – use suntan cream (SPF 20-50) if you stay outside longer. If skin changes occur that are not named above, contact your doctor immediately.

What complications may occur?

No medical treatment is completely risk-free. Normally, laser-treatment is very low-risk. Lightening of the skin or hyper-pigmentation may temporarily occur. In any case, all these effects are reversible and will disappear within a few weeks. 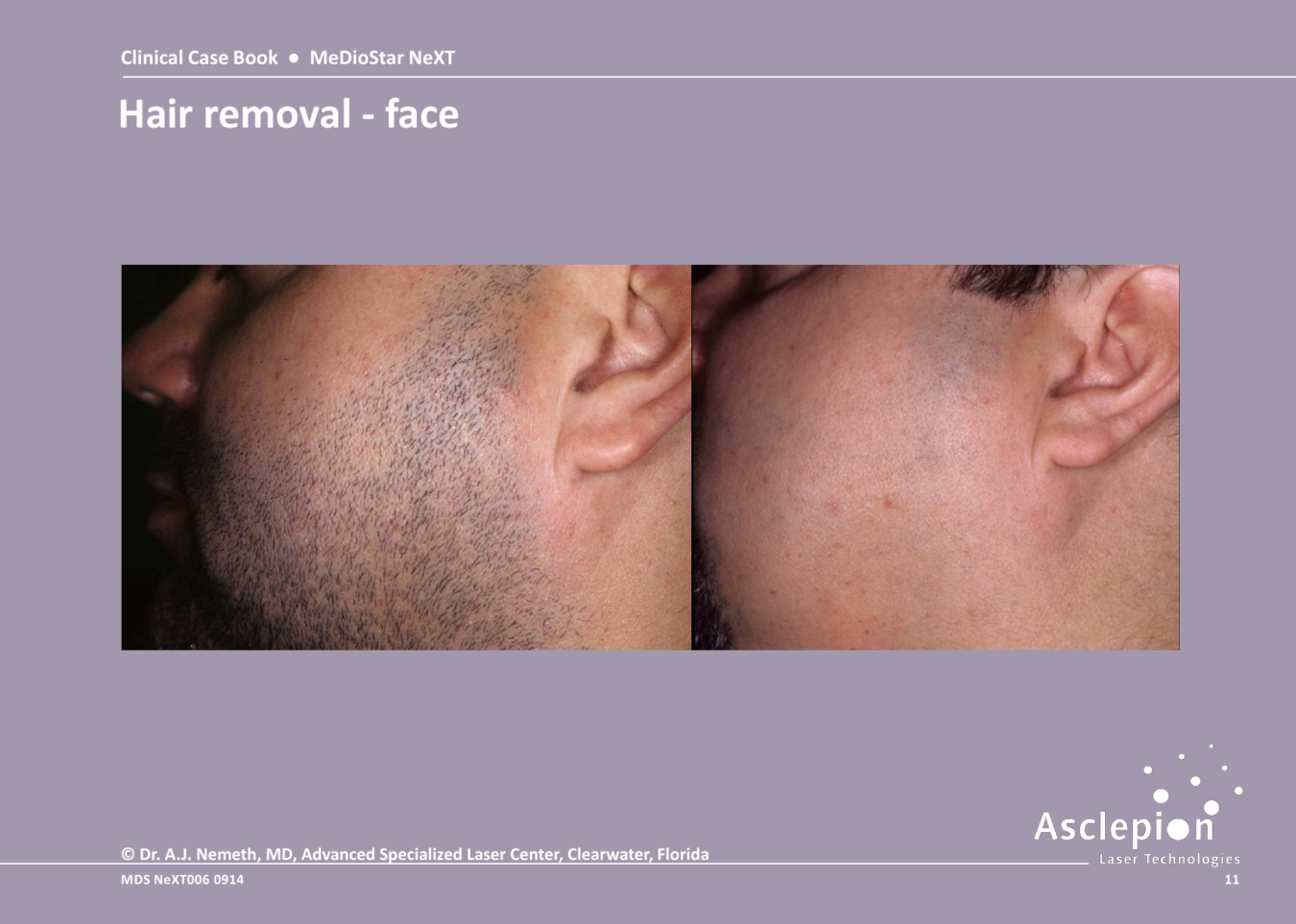 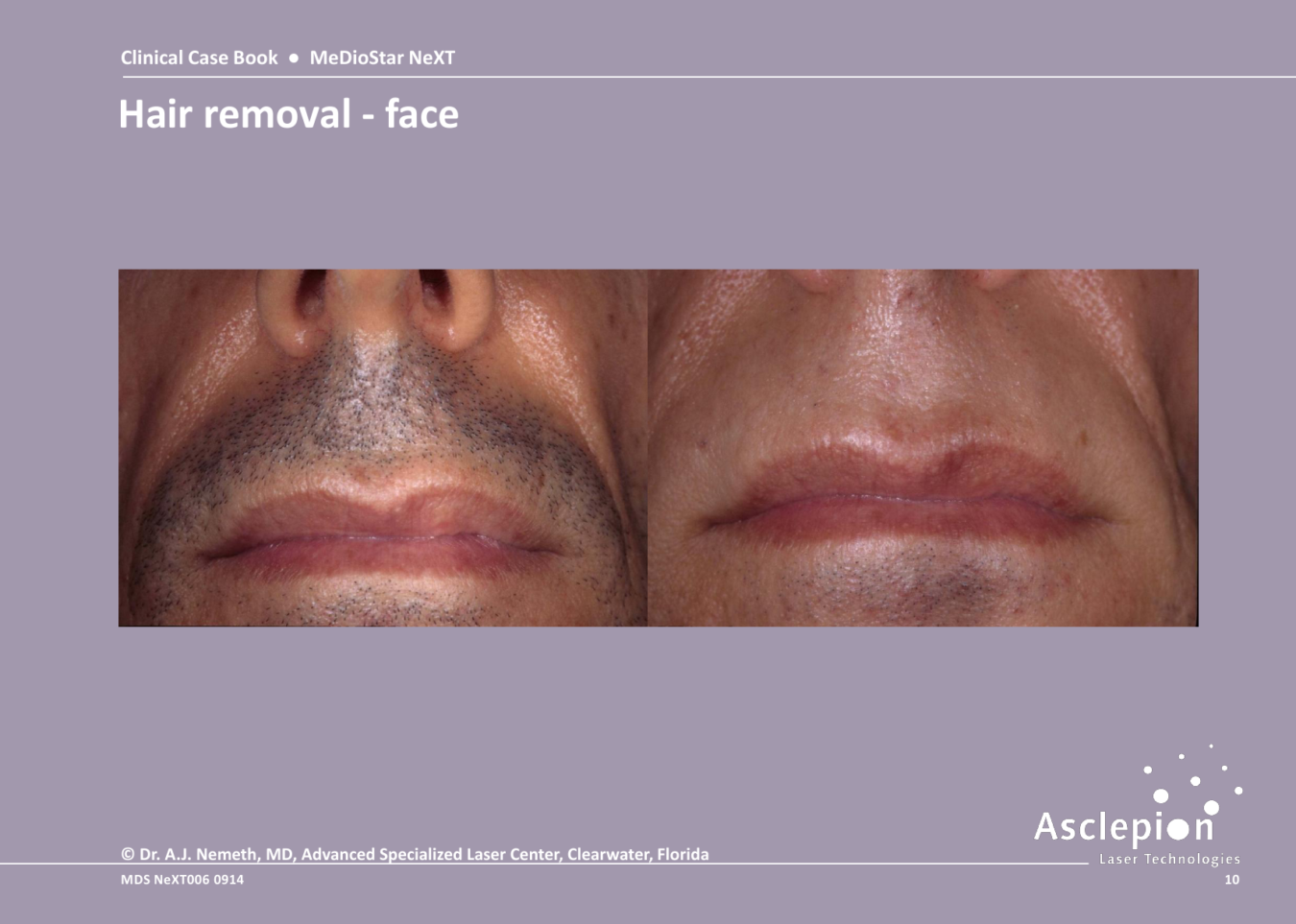 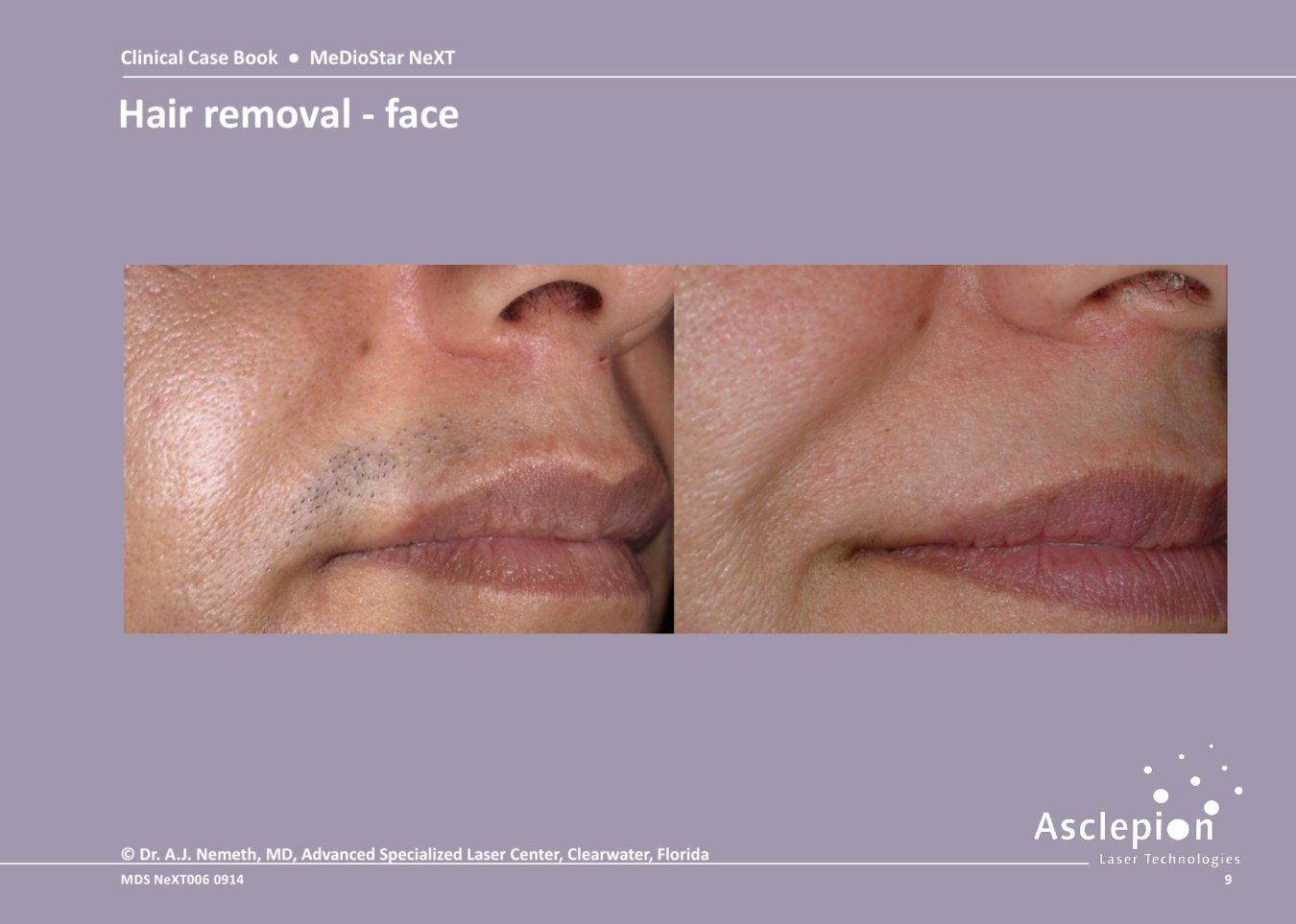 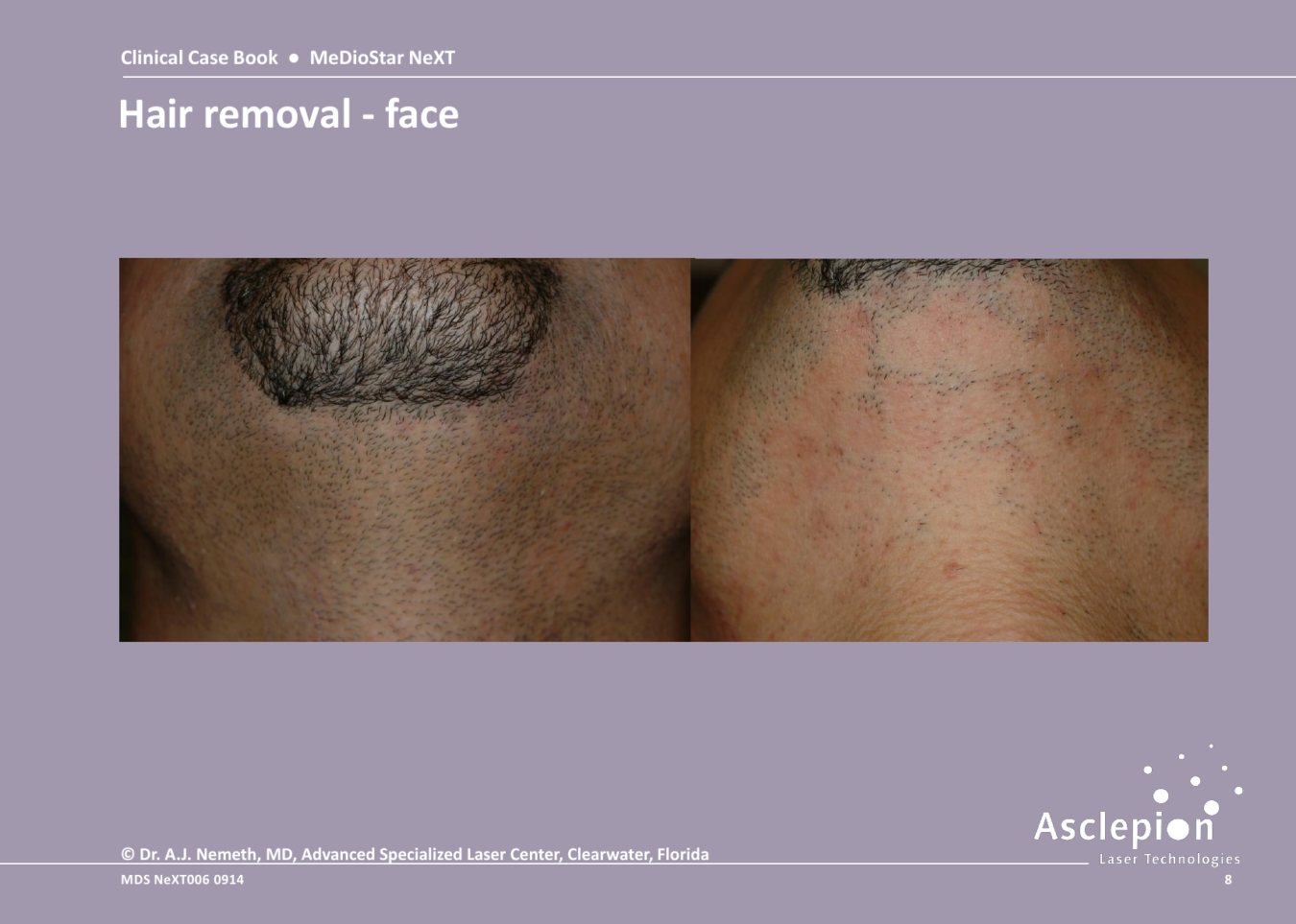 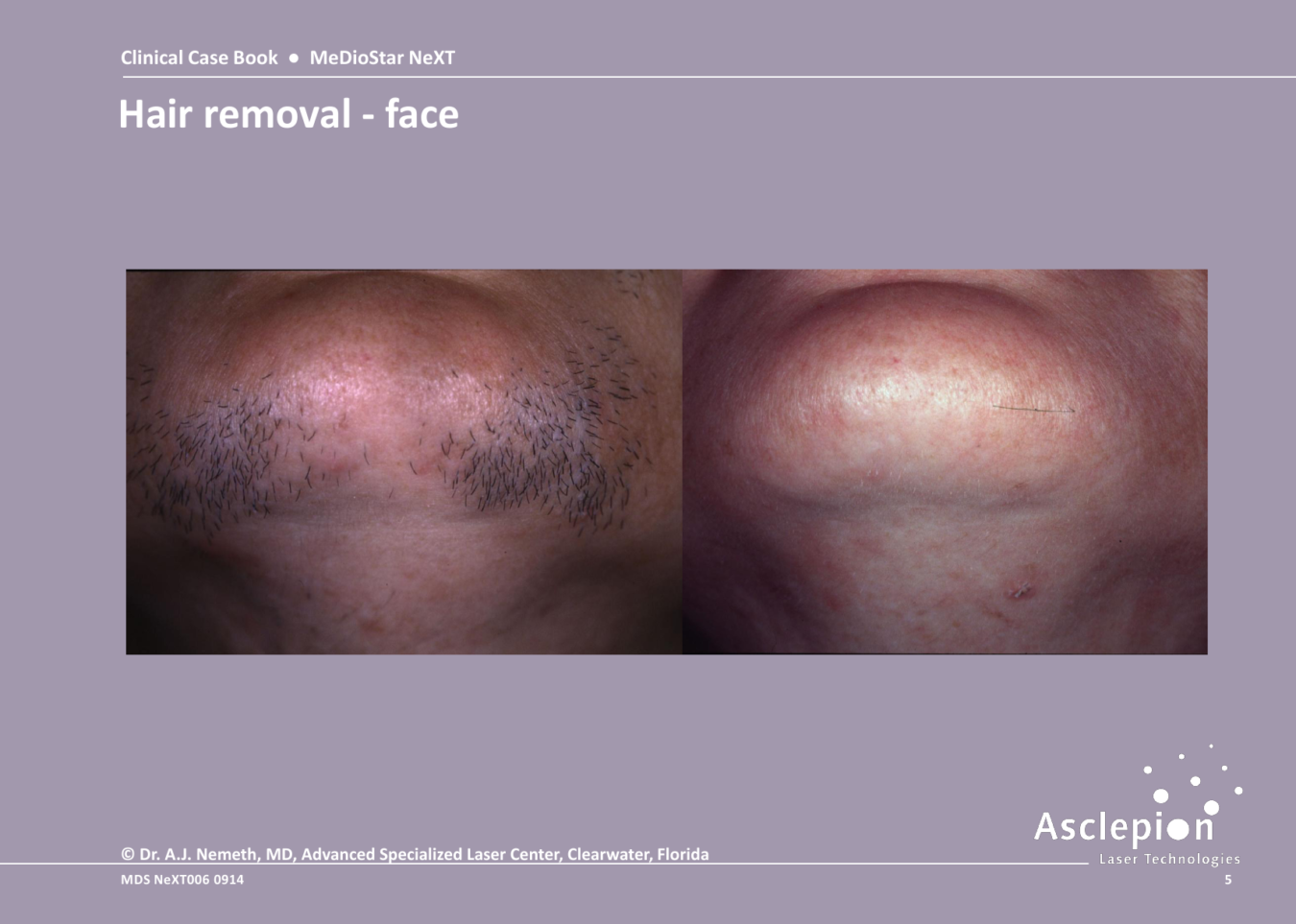 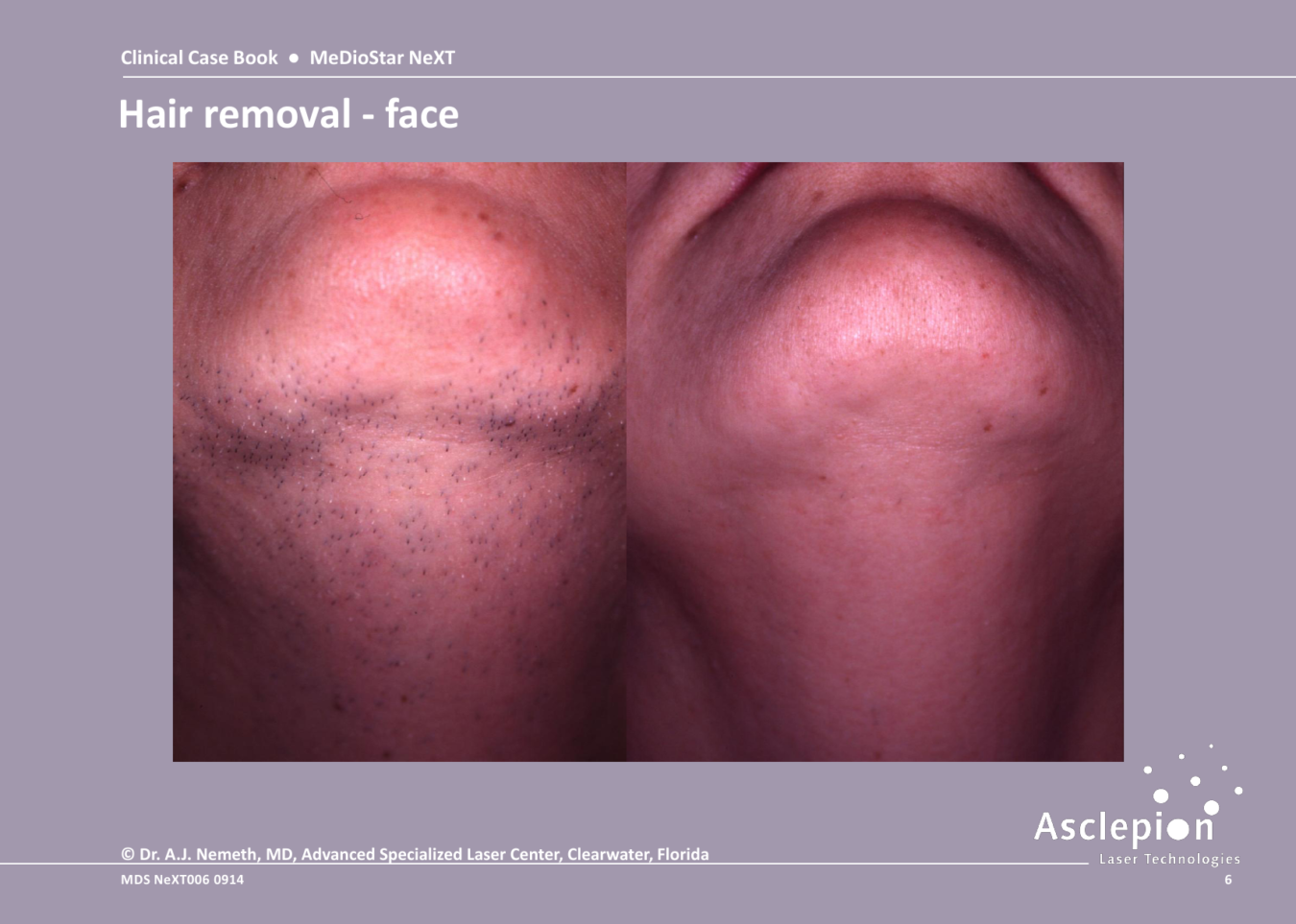 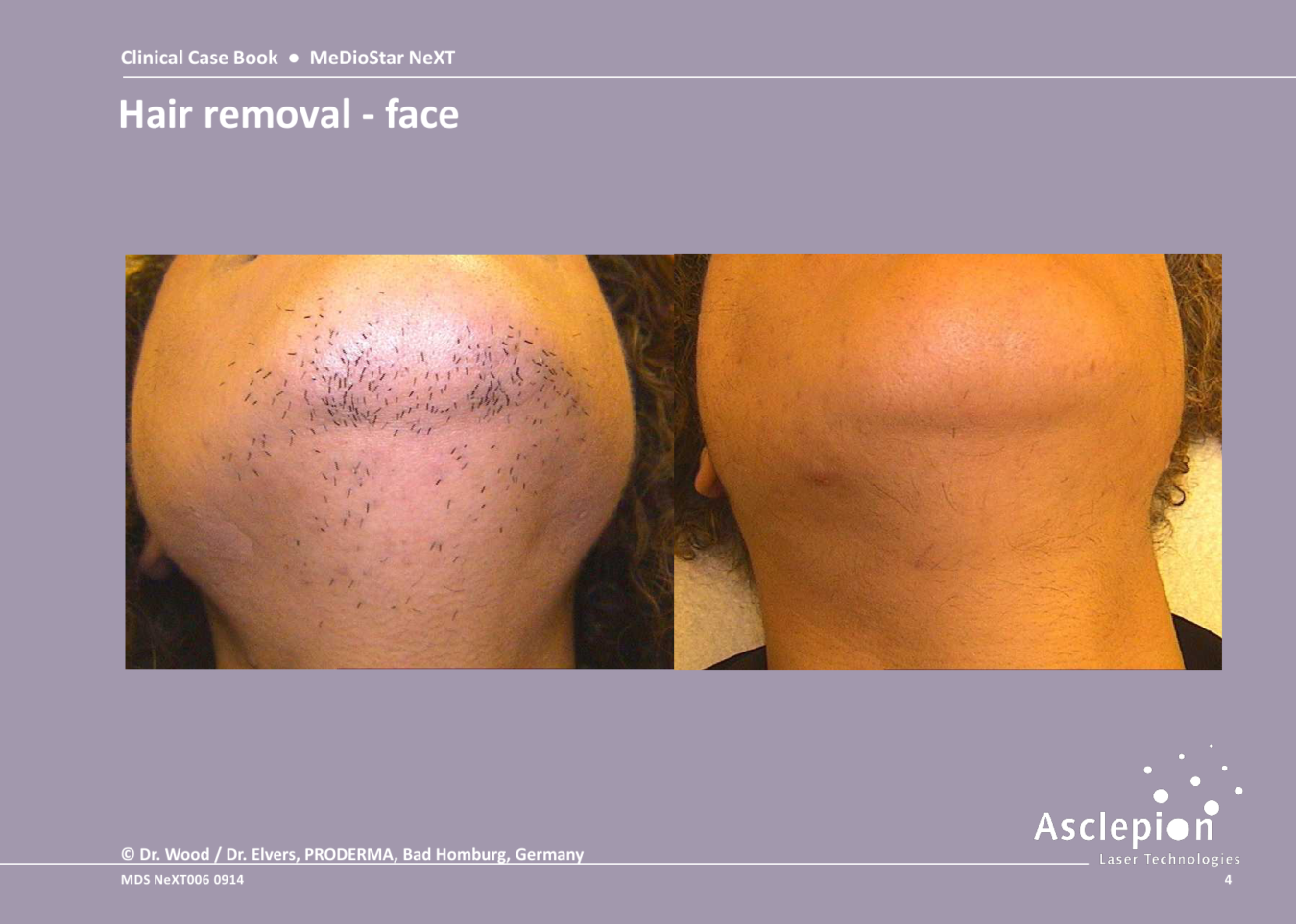 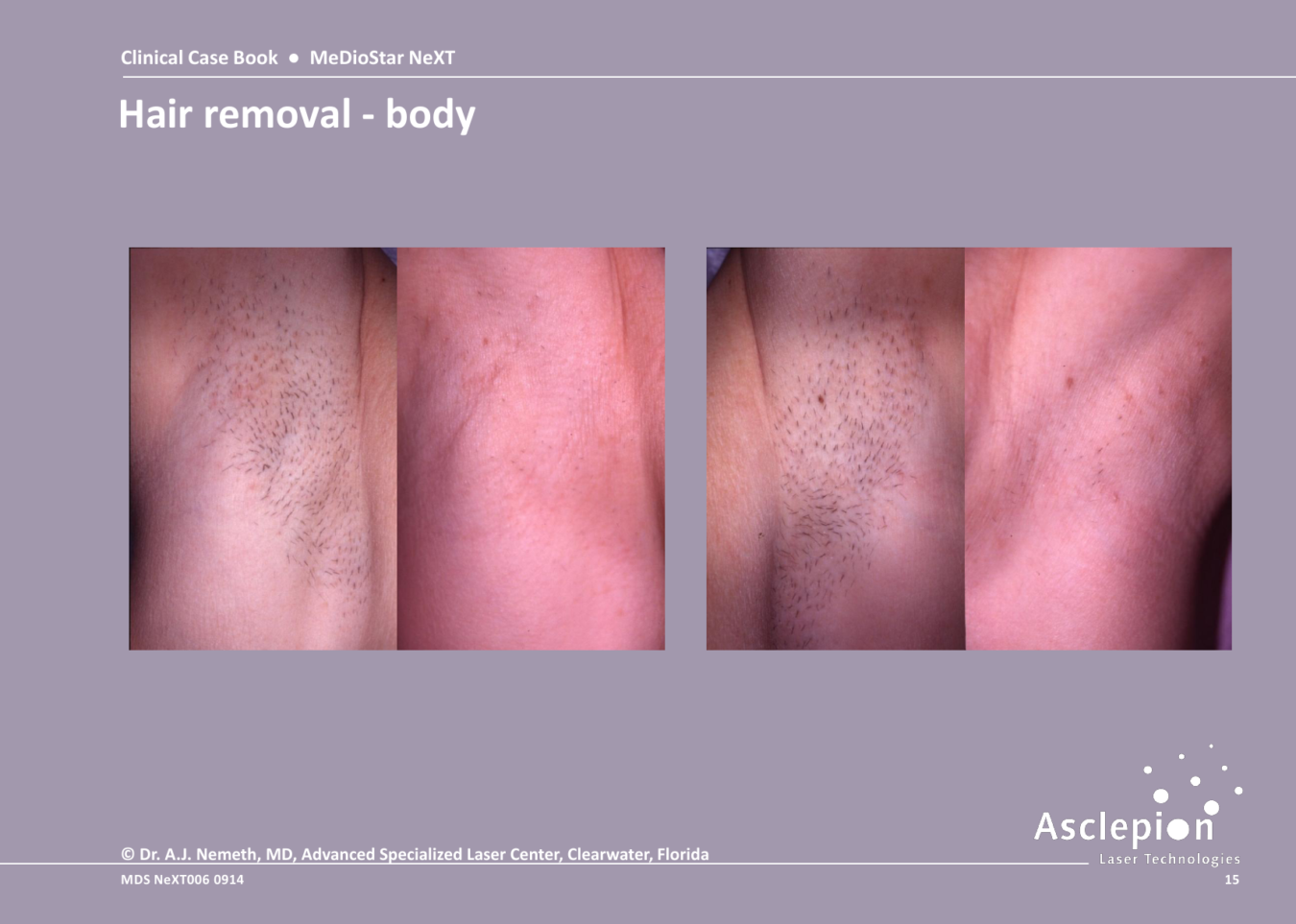 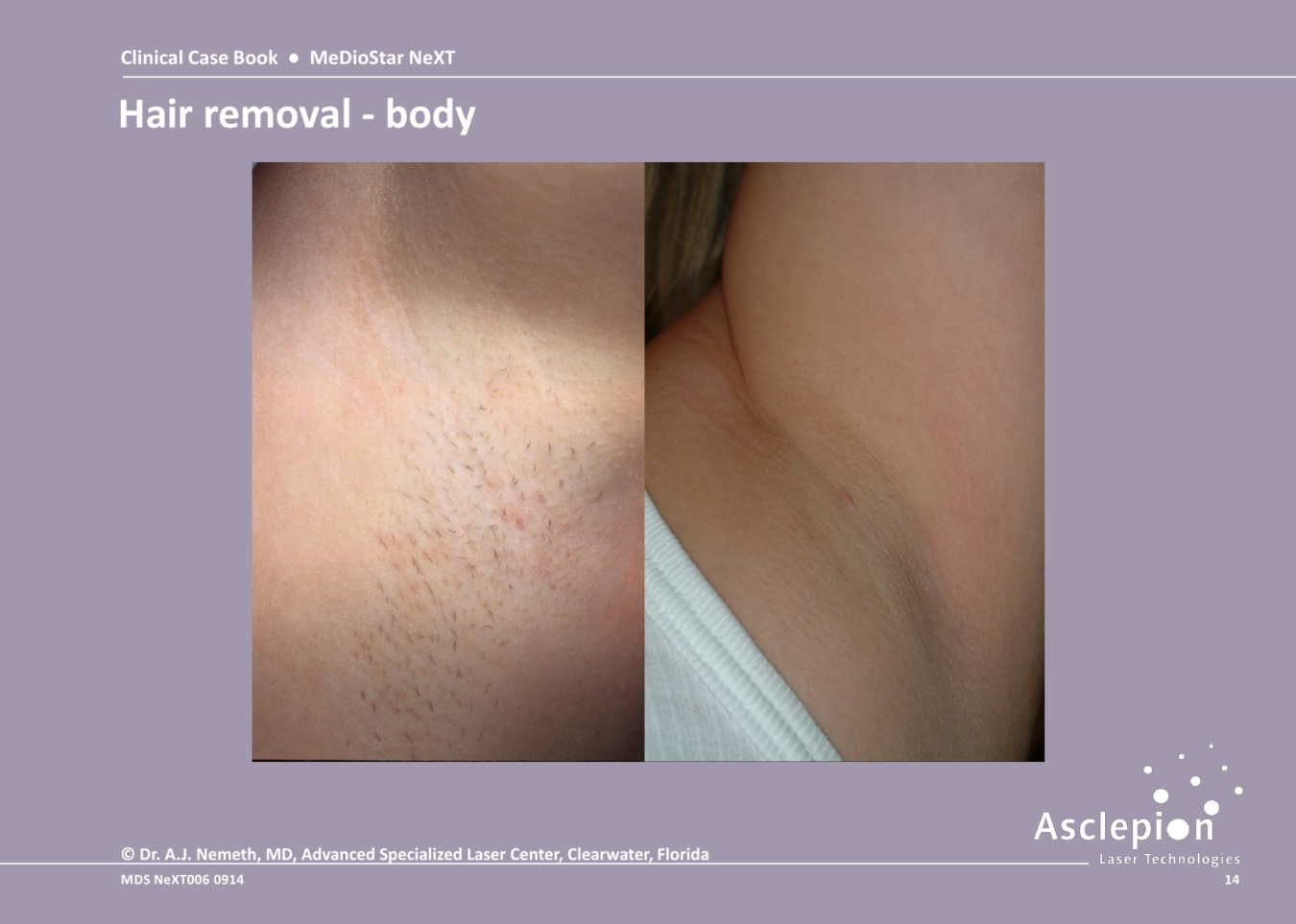 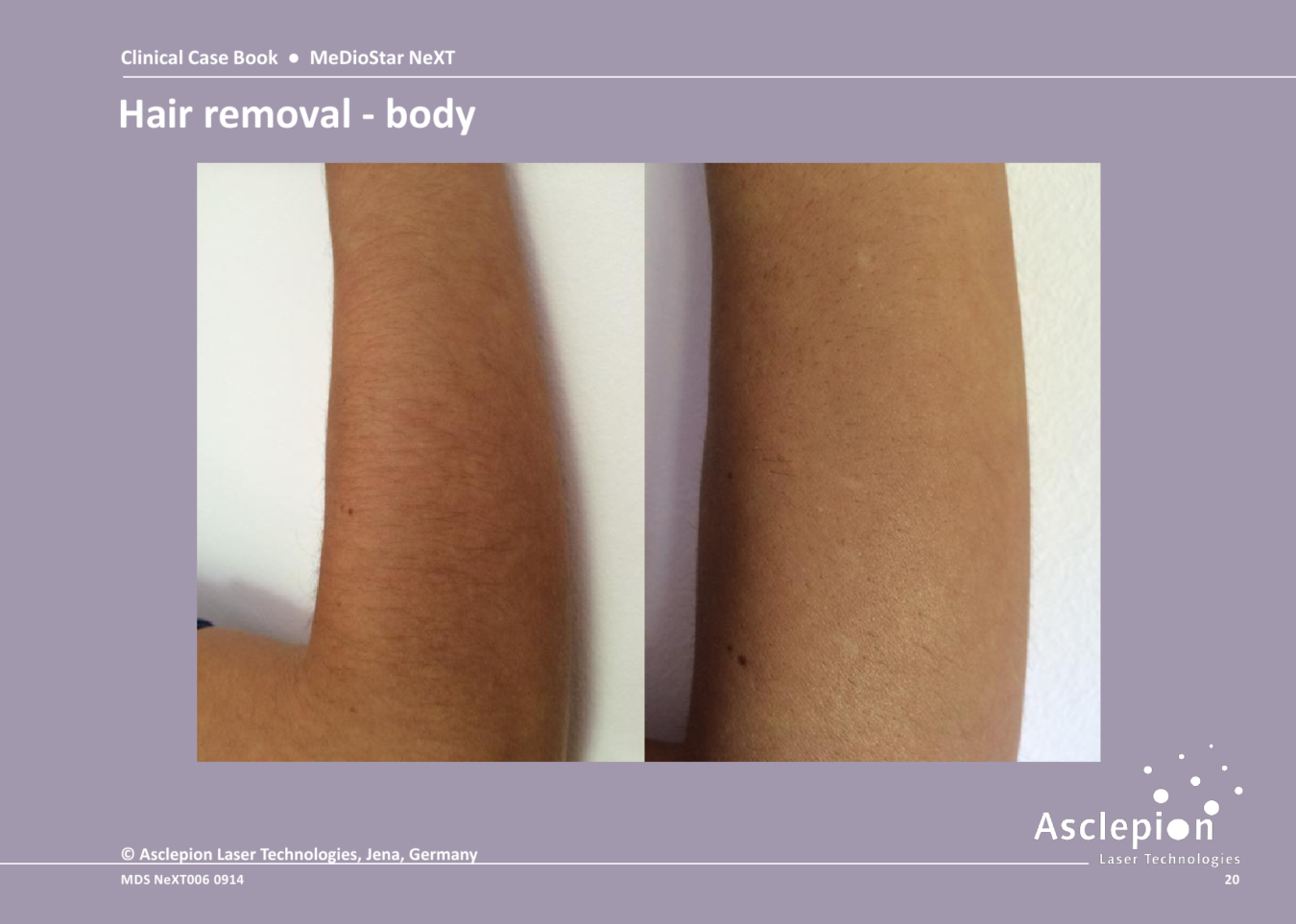 Asclepion Laser Technologies is working closely with physicians, clinics and universities to improve technologies to assess their effectiveness and safety as well as to improve its application. In clinical studies, scientific questions are answered in a controlled environment. This ensures the best possible results for both the users and patients.

With its extensive range of services, Asclepion sees itself as a competent partner for dermatologically and aesthetically oriented practices, institutes and clinics. Decide now for the treatment with the most advanced laser technology and discover a new world of professionalism and quality. 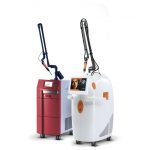